Ronald Van Deurzen is a pianist, composer & music teacher from The Netherlands who makes music for films, documentaries, games and other media projects. His music covers folk, jazz, contemporary and orchestral. Ronald Van Deurzen is also a keyboardist having recorded on various prog and New Age albums.

Born in The Netherlands, Ronald grew up with piano and organ as a child. At the age of 10 he was able to play back any song he heard by ear. Naturally drawn to creating new music he composed his first piece of music when he was 11 years old. He received lessons from a Dutch jazz pianist, improving his technique and sense of harmony. His ability on piano developed rapidly and at the age of 15, Ronald was offered to play professionally as a live-pianist for a Dutch-Belgian folk/country band and its dance company. As the youngest musician in the band he performed several times per week at venues in Belgium, the Netherlands, Germany, Luxembourg and some in France until he was 18 years old, playing American style country/folk music in bars, restaurants, festivals and other venues. Through his live experiences Ronald grew in improvising and musically thinking on his feet. It eventually led him to a spot as keyboardist on several CD albums produced in the USA, both independently and through label. The country/prog influenced Euphoria Station and Primitive Overflow, which was released on the label Progrock Records. The albums feature several profilic musicians such as '80s MTV era vocalist Donnie Vie (Enuff Z' Nuff) and harmonica player Tollak Ollestad, who played with Seal, Andrea Bocelli and Chet Atkins. The music received airplay on many popular online and FM radio stations and received positive feedback in magazines such as Fireworks UK, Prog Sphere, Background Magazine, Swedenrock and iOpages The Netherlands, giving acclaim to Ronald's contributions on keyboards.

Ronald, however, wanted to grow outside of the band environment as he searched for a calm and inspiring environment to compose and produce his own music. This led him to move to Sweden, where he could be surrounded by nature. He delved deep into synthesizers and built his own studio at the art collective 'Italienska Palatset' from where he got involved in composing music for various film, documentary and contemporary art music projects. At the same time he produced several albums of calming music, Imaginations (2012) and Tale Of Dreams (2013), taking inspiration from the beautiful Scandinavian nature. Ronald also composed a 2-hour ambient soundtrack for the indiegame 'Minions Of Mirth' ('05). developed by PrairieGames Inc. an American game company run by former members of Sony, EA and Atari. The game was an entrant at the Independent Games Festival and was released for Mac and Windows. The music was well-received back in its time by mediacritics such as GameWatcher, Gametunnel and RPGDOT.

Composing soundtrack music ignited a passion for ethnomusicology, including composing for worldmusic instruments and working with live orchestra. This led Ronald to work for a period in Asia. Here his arrangements have been performed with orchestra in Thailand, live in concert with several vocalists of 'The Voice - Thailand' (such as Thai-Chinese Anchee), featuring guest-musicians of Bangkok Symphony Orchestra. Ronald has also instructed and lectured at university in Sweden (at the age of 21) and Thailand (Faculty of Fine Arts) as part of ASEAN's international program. He taught various musical subjects in western music and composed various pieces combining the orchestra and Asian instruments, such as Saw-Duang, Saw-u, Khim and Thai Percussion.

After his experiences in Asia, he started working on his upcoming book 'Ear Training In Context'. It is currently in development for teacher and student use and concentrates on multi-part solfege of multi-timbral arrangements to prepare students for real working-life situations in bands, orchestras and in the recording studio. It features an audio disc containing over 2 hours of audio exercises.

Next to being a pianist/composer, Ronald has been a boardmember of Media Artes in Sweden, one of the country's primary concert-organisers for contemporary music/media art, supported by the municipality and the Swedish Ministry of Cultural Affairs (Statens Kulturråd). He attended various academic lectures/masterclasses in Stockholm in contemporary music composition, such as with British composer Natasha Barrett, whereafter he was commissioned to compose music for Media Artes' contemporary sound-art project 'Soundsight'. A few years later, he built his own studio 'Static Noise Studio' inside the cultural building The Italian Palace (Italienska Palatset) in Sweden: an artist collective, housing various established Swedish and international artists across various disciplines.

At another studio, the Media Artes' Blomdahl Studio, Ronald regularly experiments with electro-acoustic music, sound-art, synthesizers and various recording techniques. As this is a modern musicmaking process, often away from the piano, his contemporary art music evokes a similar sound to the music of Philip Glass, Natasha Barret and Steve Reich. He's been a member of the board of directors for both Media Artes and IPEK (Italienska Palatset Ekonomisk Förening). Within his contemporary music, Ronald immerses himself with the technology of abstract noise music. He uses soundsculpturing techniques such as frequency modulation, sampling, granular, additive and subtractive synthesis, often creating new sounds and textures which he then regularly uses in his soundtrack works. 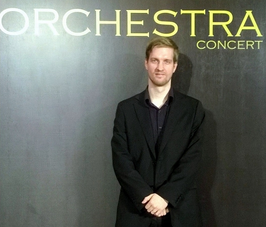